You are here: Home / E-Mei Daoyin

The 12 Daoyin of the E-Mei Mountain

The E-Mei Mountain is in Sichuan province, in Central China. This region is marked by high mountains and is not easily accessible. For this reason, the area was a favourite hiding spot for the revolutionaries and rebels of past dynasties. Generals and hopeful future Emperors, often referred to as Tigers and Dragons, spent lengthy periods of time in these mountains, preparing their onslaught on the regime they planned to overthrow. 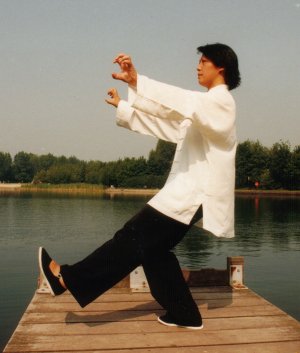 The 12 Daoyin of the E-Mei are a traditional Buddhist exercise system. About 1000 years ago a monk named Rei Yun devised this particularly effective method of exercise to train those who were to fight against the ruling army; but these exercises were also used to treat the injuries suffered in combat, and bonesetters used the powerful Daoyin to improve their skills.

The exercises are an excellent way to develop physical strength and stamina and thus are very well suited to martial artists. But the tonifying effect of the exercises means that they can be used to improve health and even to treat some diseases. The powerful force developed during the practice of the E-Mei Daoyin is also very useful for health and bodywork, such as massage, etc. 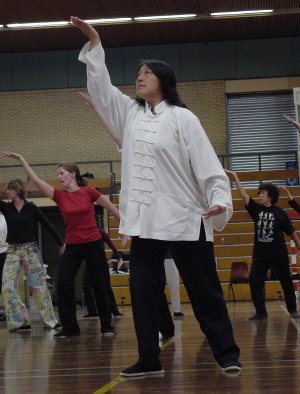 The only written material about the E-Mei Daoyin was in form of ancient poetry, which was written in such complex form and ancient language, that today’s modern language is not adequate to clearly understand and express these texts. Only very few people are actually able to grasp the full meaning of these poems. In the 1950’s, TCM Dr. Zhou Qianchuan published a book in which he clearly explains the elements of some poetry in relation to the subject. He was also teaching the E-Mei system in Beijing and Shanghai.

For optimum results, one needs to pay attention to develop the exercises one by one, and each individual exercise stage by stage. Then it is possible to open the body’s energy channels and meridians, enabling the practitioner not only to achieve a high level of physical energy, but also to develop to a high stage of the Chan (Zen) system.