You are here: Home / Spontaneous Movement

The body also uses spontaneous movements as an auto-regulating function, to restore balance: when the eyes get too dry, they blink, when the body is tired, we yawn and stretch the spine, when something disturbs the throat we cough etc. This natural spontaneous movement usually does not occur in other muscles than those associated with these specific activities.

You can try the position as in the picture, putting the body weight on the front of the feet, relaxing the muscles of the legs and quieting the mind. If the legs and abdomen are sufficiently relaxed, one can feel a force coming from the feet through the legs to the abdomen. This force can cause two kinds of reactions, body movements – internal and external -and emotional release. 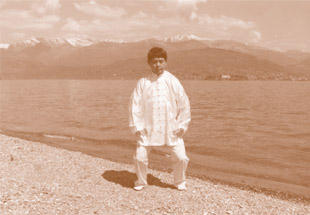 The internal movement can provoke sensations of cold, wind, itching and warmth etc. moving in certain areas of the body. If it is directed to the hands and feet, we can often see the hands changing colour and becoming red or blue, or white blotches under the skin, later returning to their normal colour. I call this a binqi-reaction (more information on binqi can be found here). Usually the internal movement develops over the body, starting with vibrations, later on followed by jumping, kneeling, prostrating, or some other beautiful movements as dancing or martial postures, and finally the person wants to sit or lie quietly. In general in young people the movement is quite strong, whereas in older people it is rather slow and gentle.

Continual quieting of the mind in this position will release emotional information. People may start to cry, scream, sigh, and later on laugh and sing. Belching and yawning, sweating and winding often accompany the emotional release. In weekend courses on Taijiwuxigong (our qigong system) often one or two percent of new students get the spontaneous crying reaction during the Wuxi stand exercise. This reaction is prevalent with female participants.

After one or several sessions of spontaneous movement, people can feel great changes in the body. Most of the students tell that the body feels much lighter than before. Students with some ache or illness, often have symptoms such as pain, itching and swelling diminished and even disappeared. Also the emotions change from negative to positive. Any physical and emotional tension, which has accumulated in the body, will be eliminated. Moreover, spontaneous movement exercises can improve cases of chronic diseases, and also many difficult diseases for which normal medicine or TCM knows no answer.

We can get spontaneous movement through standing, sitting, lying down or movement exercises. The key to receiving spontaneous movement is the activation of the dantian. Ancient Chinese think that a certain area in the belly – the dantian – is the centre of the Yuanqi. (often translated as ‘energy’). They locate the dantian in the middle between the navel and the pubic bone in the straight abdominal muscles. Their idea of health is that one should save Yuanqi in there. That area is the centre of the abdominal triangle. We know it is a very active physiological centre: through a nerve branch it is connected to the adrenal glands influencing the entire energy system of the body; it is linked to the lymphatic system, so also to the production of immunity substances, etc.

The force of any body movement can connect to the dantian and hence activate the energy system, even so with the force of breathing, thinking, etc. The earth has a force that can influence the dantian through the legs. All these forces emit a different frequency. These frequencies can find resonance with the hidden frequency of the straight abdominal muscles, amplifying the vibration in that area. This vibration spreads out to neighbouring parts, and even throughout the whole body. For beginners this can take some time, but during the Taijiwuxigong lessons the teacher transmits vibration force to help activate the dantian.

With more practice, the dantian force gets stronger and will then slowly link to the movement of the body. When the force develops, it can rush upwards into the central channel and remove emotional information. Different positions can send this force through different channels and activate the small circulation and the left/right circulation.

Spontaneous movement is a natural quality of the body that can keep us healthy and even cure illness if we understand how to use it. During and after the Wuxi stance binqi starts moving freely in the body, and we must give outward direction and open the hands to let the binqi quit the body. If we do not practice correctly, thinking we have to keep the chi in the body or thinking it is a relaxation exercise, it can cause uncomfortable reactions. It is like a good horse, and a good horse needs control to be ridden…